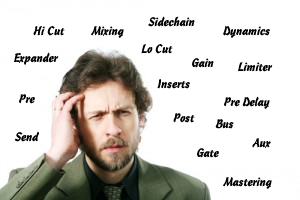 I remember back in the days when me and my friends would look at the magazines that you could buy that covered everything about Recording, Mixing and Mastering. These magazines where the closest that we could get to a real studio of course there where books you could buy and schools you could go to. I remember when my friend called me and told me he had bought a Tascam PortaStudio, it was a 4 track recorder that recorded to cassette. When looking at it I would think, what do you do with all those knobs, how do you know what to EQ? My friend was just learning to but he had a very good understanding but was not very good at explaining, most likely because I didn’t really know what questions to ask, it was all so foreign to me. I was happy playing my instruments but deep inside I wanted to understand all these Audio terms and how it all worked.

As the years went on I found that a lot of my friends where all into music, some very good at playing, some very good at the engineering side of things. I found myself one day standing in the Control Room at Critera Studios looking at all the gear, the mixer and it all looked so cool but I really had no idea how it all worked. What was so weird was I had friends that worked in the biz and I had tons of resources to learn from but it just was not clicking, my understanding of how a mixer works, reverb, compressors and most of all equalization just to name a few. It seemed that I was smack dab in the middle of a technology revolution of Audio Gear and all I knew was how to play…that was easy.

Soon it was the mid 80’s my friend had told me about the new Technics RS-B11W Dual Cassette Player/Recorder and told me I could multitrack record with it, I bought one.
What was so cool about it is it had a center microphone input and it had an option for Dubbing/Mixing. This I understood, record onto one cassette and when your done take that cassette and put it into the right side, press the Dubbing/Mixing button, add a new cassette to the left side, plug my mic into the mic input, get a level and press record. This was awesome I could get 4 track recordings out of this thing. I used this Recorder for years, I would make a recording grab the cassette and get in my car and listen to it, go to a friend’s house and let them listen to it and it was cool. The thing that made this device so cool is that it was easy to use so I went on using it for years. Soon it was 1990 and Boss had released the SE-50 and I bought one to add to my home studio, I now had a 4 track recorder with a full effects processor, my studio had just moved up in the world, it seemed that way to me. Now I could add Reverb to my Drums and Vocals, get killer Distortion for my guitar. It was amazing but with all this I still did not understand all the things I wanted to understand about a mixer, studio gear, recording…etc.

One day I thought I would go to the bookstore and find a good book on everything about recording and mixing and found one, it even had audio examples. I read the book and came away with some vague understanding of how a compressor worked and mostly an understanding of the different kinds of microphones and which ones are good for Kick, Snare, HH, Guitar Amp..etc. I was learning but at a snail’s pace, I was a bit bothered by the fact that I had tons of resources within reach but not one yet had been able to open true understand. 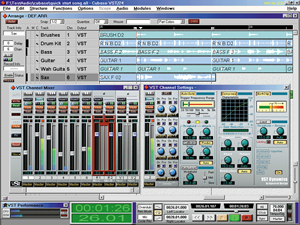 It was 1998 when I finally got my first computer and soon after bought Cubase 3.7 a full-blown studio inside the box. It was a dream come true with all its capabilities, my Technics RS-B11W had been taken over or had it? I thought that by having all these effects and multitrack capabilities I would surely figure out the those things I was fighting to learn. I was dead wrong, what I learned was there was tons of other things I had to learn first like how Cubase worked, how to deal with sound card drivers, how to deal with Windows and on and on. I found myself back tracking ideas on my Technics RS-B11W and soon sold Cubase. By now I was sure it was not me, it had to do with something far more complex, why can’t I just talk to someone or watch someone and learn all this stuff?

Soon 2000 came and I was searching the internet for the information I wanted to learn about I joined all kinds of forums and would search and read through them and after doing this for months I realized something and it was awesome and in a way infuriating. What I had learned is Producing, Recording, Mixing and Mastering are all made up of Equipment Knowledge, Tried and True Methods and an overwhelming amount of opinion. I know all these Opinions were the factor that was making all this so hard to learn. I found tons and tons of conflicting answers for what should be a short easy thing to explain. I would find that the Masters, that’s how I labeled them, would answer questions but for the most part it would be like they are talking to another Master. Even videos I bought would be the same, nothing was being explained in a logical simple way.

It had been many years and I had not given up and now with all that I had learned I thought I would go back to the book I bought years early and focus on three things, how Compressors work, how to use an Equalizer when mixing and Levels from Recording Input to Mastering Output. Everything I had learned had all circled  around these three things or at least it seemed this way to me. It was easy to see just look at any mixer and it will have Levels, EQ section and some will have both EQ/Dynamics they must be the key factor in all this. Now that I had narrowed everything down to these three everything started to click, I just cared about how they functioned and the methods they were made for.
There where no opinions here and it was unbelievably easy to understand.
Once I learned these things everything else just followed, it’s was like the flood gates opened. 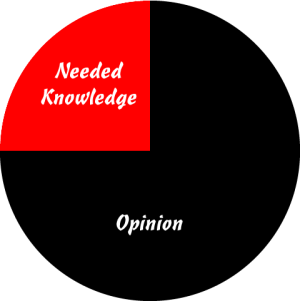 Looking back on all this I came away with an understanding that the Producing, Recording, Mixing and Mastering world is made up of 75 Opinion and 25 Needed Knowledge, this is the way I see it. Ask a simple question and you will get countless answers. Looking to buy a new compressor there are 100’s upon 100’s of them and more coming out next week. Goto any forum or ask two people the same question about a subject and you are bound to get different answers. I searched long and hard and in the end I learned the Needed Knowledge and after that it is all me.

Here at LearnReason.com the focus is the needed knowledge, not the next new thing, with a dash of the sugar of opinion to top off the stellar foundation,