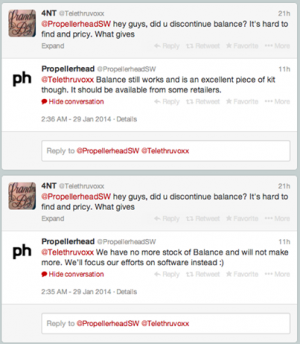 The End of Balance

Propellerheads is not going to be making Balance anymore. This is straight from their Twitter page. Balance was Propellerheads first go at a Hardware Interface back in 2012 and it only took them 2 years to get out of the Hardware Market. Its kind of a bummer but there is some cool stuff here. With Balance Propellerheads introduced some new technology called Clip Safe which records in the background a copy of what you are recording at a lower Gain setting. This can come in very handy if you happen to overload your A/D converters. I contacted Propellerheads asking them if the end of Balance and their Clip Safe Technology is built into Reason. They replied that it takes the Hardware and Software  together to make it work and it would be up to Hardware Developers to offer it in their Hardware to work with Reason. Could this be a strategy by Propellerheads to market a Technology the likes of Rewire and Rex files?